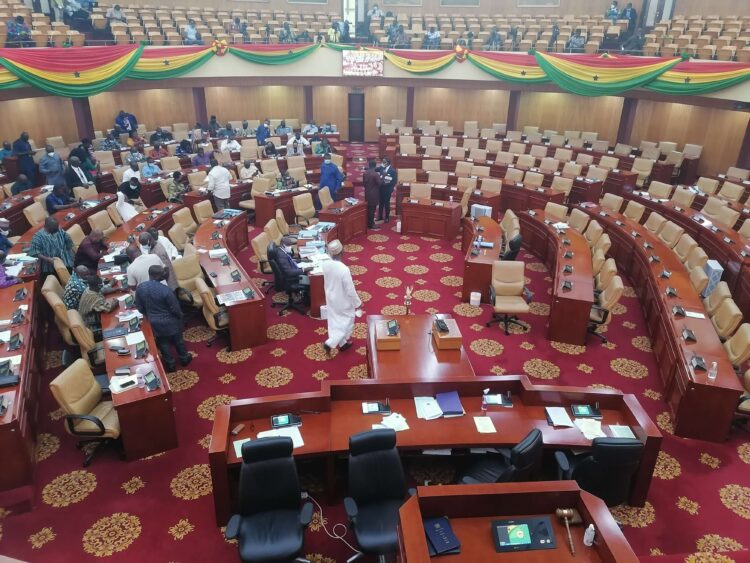 Minority Group in Parliament has served notice it will reject the 2022 Budget Statement and Economic Policy of the government in its current form and shape.

According to them, they will not accept or approve a budget with numerous “killer taxes” including the newly introduced E-Levey also refered to as “momo tax”.

At an emergency Press Conference on Friday, November 26, 2021 in Parliament House, the MP for Ningo Prampram, Sam Nartey George cautioned the Majority side of the House to respect the sitting time of parliament.

The Minority side also accused the New Patriotic Party (NPP) MPs of running away from their own budget by not coming to the chamber.

As at 1:08pm on Friday when the media engagement was taking place in Parliament, there was not a single NPP MP in the Chamber.

According to Sam George “go and check, we’re set and ready to conclude the debate but unfortunately people in charge of government business are not available as we speak”.

“As we speak, the Speaker is ready in lobby waiting for the Majority side to come for him to commence public business”.

On Thursday November 25, 2021, the speaker adjourned the House to Friday at 10am, however, as at Friday afternoon when we’re filing this report, sitting was yet to start.

In a sharp rebuttal, the Majority Chief Whip and MP for Nsawan/Adoagyiri, Frank Annoh Dompreh rejected all the accusations by Sam George. He said they were in a caucus meeting discussing some matters related to government business.

“I’m just coming from the meeting, and I’m going back to continue our business,” he stated, emphasizing that, “we’re not shaken by their treat to reject the budget because we know what to do, as was done during the approval of our Ministers”.

In related development, Deputy Minority Chief Whip, Ahmed Ibrahim, has asked the Majority side of the House to come and move the motion on the floor and leave the Job 600 building.

He described the momo tax as “digital corruption”, and called on his colleagues to vote against it.