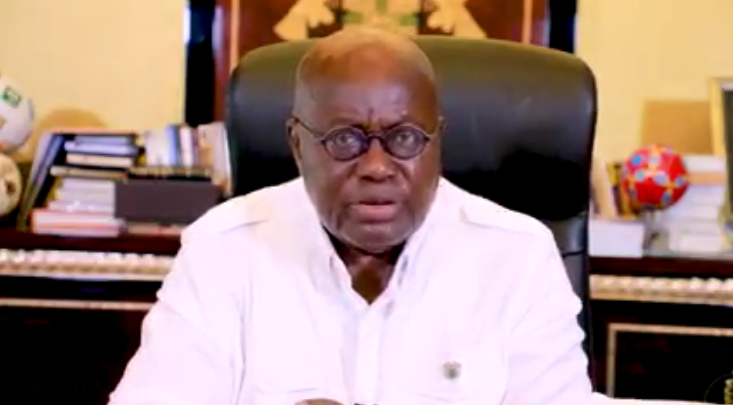 Will President Akufo-Addo’s Government for once be serious with the Covid-19 Fight?

Ghanaians should be filled with revulsion over the continuous display of lack of leadership by President Nana Akufo Addo and his government as well as the New Patriotic Party in the management of the much dreaded COVID-19 pandemic.

To be blunt, Prez Akufo Addo himself, his Appointees, NPP leadership’s conduct in relation to COVID-19 glaringly fly in the face of the President’s own ‘sermons’ he has been delivering to Ghanaians.

Only about a week ago, in his 27th COVID-19 ‘sermon’ (via national broadcast), President Akufo Addo who for once in months had found his nose mask, and ahead of the Yuletide, was discouraging Ghanaians from gatherings and outdoor events, all in an effort to curb COVID-19 spread, himself immediately after, organized a luxurious end-of-year get together at his Nima residence which saw a large attendance.

Even before the event in Prez Akufo Addo’s house, the NPP organized a National Delegates Conference in Kumasi where disregard for COVID-19 protocols by party members was more than glaring.

All the assurances relating to COVID-19 protocols that the party gave prior to the conference were as usual mere utterances – very much akin to their campaign and manifesto promises – never to be fulfilled.

Also, only about three weeks ago, preceding the Kumasi conference and the end of year get together, South African President, Cyril Ramaphosa left Ghana and was said to have tested positive to COVID-19 for which he was reported to have gone into self-isolation.

To some of us in Ghana, the news about South African President testing positive for COVID-19 was received with some amount of apprehension especially that he left our shores not long after the news broke, expecting our health Authorities and the Presidency to do the needful.

Managers of President Nana Akufo Addo including his Advisors on Health till today had not seen the need to inform Ghanaians as to whether President Akufo Addo, his Chief of Staff and others who came into contact with the South African leader had taken similar measures of self isolation etc.

More especially from the viral videos we saw of Nana Akufo Addo with his South African counterpart, our Chief of Staff and other dignitaries dancing to highlife music with very little regard for COVID-19 protocols, even if all is well; that there’s no cause for alarm about COVID-19 infections, do Ghanaians not deserve a communication of assurance of a sort from the government?

The saddest part yet, is the deafening silence of Ghana Health Service (GHS) and its mother Ministry, Ministry of Health MoH) over the matter.

Elsewhere, the Health Minister, Director General of GHS and his Lieutenants (COVID-19 combat team) would have resigned their positions to send a strong signal to the country’s leadership on its lack of adherence to COVID-19 protocols just as the (un)intended effort to stifle COVID-19 fight.

It does appear too that the Dr Patrick Kumah-Aboagye led GHS have only the ordinary man on the street as their sole focus as far as COVID-19 fight is concerned, caring little or not about the Executive – the President in particular, his assigns, NPP leadership among others.

Our Health Minister, Kwaku Agyemang Manu, for instance is on record to have been directly accused by his own constituents of testing positive for COVID-19 yet refusing to self isolate and went touring his constituency during the 2020 Voter registration exercise. Where, apart from Nana Akufo Addo’s Ghana can this happen? Heard the GHS condemn the act?

Lest we forget that our Health Minister’s reckless conduct led to an explosive scandal necessitating a Parliamentary inquiry which established that the Minister did not seek Parliamentary approval as Article 181(5) of Ghana’s constitution clearly requires in international transactions.

It was also evident that the Minister lied that no payment was made to the suspicious characters (Middlemen) he contracted to supply the vaccines as evidence from Controller and Accountant General’s Department shows advance payment had been made to the Middle men.

It also emerged that the Attorney General’s opinion was against the deal but in all of it, the terribly indicted Health Minister is still at post, rather being protected by President Akufo Addo.

One other point of leadership failure or complicity in the terrible management of COVID-19 was the reckless, in-human decision to do a new voters register when the disease was ravaging our country, and it showed in the figures.

Suffice to say that the reckless conduct of Prez Akufo Addo, his assigns, NPP members and others in the face of the COVID-19 scare is not only limited to what is above named.

Earlier in the year, at the height of COVID-19 third wave, I recalled President Akufo Addo as the chief mourner, presiding over a very chaotic ceremony at Kwadwo Owusu Afriyie (Sir John’s) funeral, where the funeral grounds in Wonoo became a political campaign grounds for his Vice President, Dr Mahamadu Bawumia with no regards for the COVID-19 protocols.

Have you heard that someone had been held responsible and punished for same over the chaos at Sir John’s funeral?

Regrettably too, the mortal remains of Sir John was handed over to his family, a development which runs contrary to the Akufo Addo government’s own regulation that no corpse, confirmed of dying through COVID-19 would be released to the families of the victim as burying of COVID-19 corpses is solely the responsibility of the Environmental Health Personnel.

As if that was not enough, Prez Akufo Addo soon after presiding over the chaotic funeral in Wonoo in Ashanti Region, embarked on a 2 day Regional tour of the Upper East, where the Ghana Education Service in the region mobilized school children to lineup the streets of Bolgatanga to cheer him up, succeeded in endangering the lives of the students, teachers and parents.

Sometimes, one wonders whether the Akufo Addo government and party see the COVID-19 pandemic as an avenue to only milk the state dry and doesn’t wish COVID-19 goes away anytime soon.

Otherwise, why is it that they are largely the ones seriously undermining the COVID-19 fight?

On the COVID-19 expenditures, actually, Ghanaians are yet to come to terms with the staggering Gh22 billion that the Akufo Addo government claimed it had spent on COVID-19 which some of us are not surprised the government is unable to heed the call for the Auditor General (AG) to audit the COVID-19 related expenditures.

Notable among the ridiculous expenditures are Gh580 million spent to procure Hand Sanitizers, Nose Masks, Tissue Papers. There is also a Gh600 million expenditure which is captured as unaccounted for/unexplained expenditures.

Then there was a Gh54.3 million supposedly spent on food items meant for vulnerable families during the 3weeks lockdown, a distribution that the Member of Parliament for Klottey Korley constituency, Dr Zanator Rawlings was suspicious of, accusing the government of sharing the food items only among NPP supporters, demanding an investigation into the matter.

“Mr Speaker, the support to households, in terms of supply of dry food packs and hot cooked meals cost Government Gh¢54.3 million to enable them to mitigate the impact of the pandemic”, Finance Minister, Ken Ofori Attah told Parliament.

As to the issue of electricity/power and water claimed to have been freely given to the people, we are witnesses to the government’s own U-turn on the matter; Information Minister, Kojo Oppong Nkrumah telling Ghanaians, “the water and the electricity were free then but the time for the people to pay is due” which is now in the inform of COVID-19 tax whose brunt the people are currently having to bear.

While at that, these few days, Ghana’s current COVID-19 cases are fast rising, seeing not less than 1,000 cases per day, registering 1,324 cases on December 22.

Meanwhile, Public Health expert, Nana Kofi Quakyi is warning that health systems will be over stretched beyond their current capacity if much is not done to curtail the spread.

Nana Kofi Quakyi’s warning falls in line with the fears of some medical doctors who are also speaking; demanding for an urgent action.

The unit, he said risk being shutdown due to this development.

This is just part of the reality that we are currently faced with in the COVID-19 fight.

President Akufo Addo and his government must in the face of the COVID-19 fourth wave scare, learn to demonstrate leadership – prove it is able to effectively contain the menace.

“Leadership is cause, all others is effect”.

(The writer is News Editor, The Catalyst Newspaper and an Advocate at SDDDF-Africa)